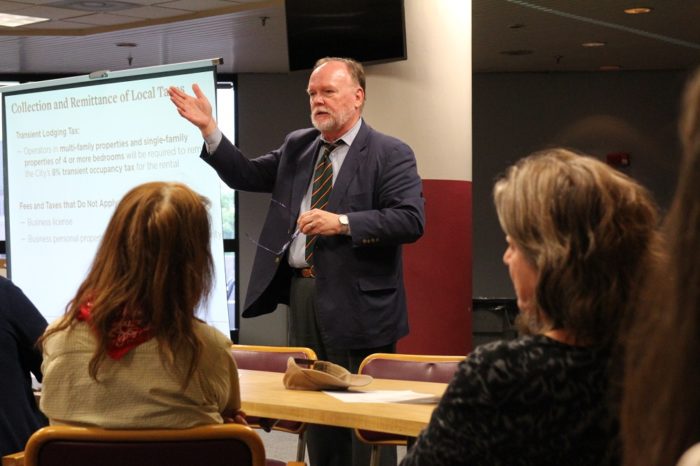 Correction: Deputy Director Kevin Vonck was hired in August 2020. An earlier version of this story said he was hired the previous year based on information from the city that was incorrect.

Richmond’s planning director for the past decade is no longer with the city.

A reason for Olinger’s departure was not provided, and attempts by BizSense to reach him over social media were not successful Tuesday. A call to Olinger’s mobile phone prompted an automated message saying the number had been restricted.

Deputy Director Kevin Vonck, who joined the city in August of 2020, will lead the department as acting director.

Olinger’s exit abruptly follows several big initiatives that he had been leading that drew some controversy. Biggest among them was the years-in-the-making Richmond 300 master plan update, which the City Council adopted last month with the caveat that amendments to the plan would be made.

Olinger also had been driving the latest phase of zoning amendments related to the city’s Pulse Corridor Plan. Proposed changes, which opponents had said contradicted that plan, had been targeting areas north of Broad Street from the Fan District before they were put on hold late last year. Other initiatives included rules for short-term home rentals and changes to the city’s B-3 zoning district.

Asked if Olinger had given notice that he planned to resign, Jim Nolan, a spokesman for Mayor Levar Stoney’s administration, said the city does not comment on personnel matters.

Olinger had worked for the city since September 2011, when he was hired as director after stints in similar roles in Madison, Wisconsin, and Dayton, Ohio, according to his LinkedIn page. His last day with Richmond was Thursday. His annual salary had reached $142,867.

Vonck, whose current salary is $125,000, was hired last August after working as development director for Green Bay, Wisconsin. He will oversee a Richmond department totaling 106 employees with 18 staff vacancies.

On Friday, the city announced informational meetings related to proposed zoning changes aimed at promoting supportive housing and recommended in the Richmond 300 plan. The announcement listed Vonck among city contacts for information about the changes.

Olinger is the latest high-ranking employee to part ways with City Hall.

Last month, Lawrence Anderson, the City Council chief of staff, left for a job with Baltimore, Maryland. Last March, Doug Dunlap, the city’s housing, community and development director, resigned with a nearly six-figure payout, according to a Times-Dispatch report.

Mark can be credited with many accomplishments while in his city post and I wish him well for the future. HIs ten year run saw the city apartment scene explode with rapid growth and put a lot of pressure on his department for much needed changes. Those changes await. This administration needs to put more resources to bear so that the city’s growth does not abate. It needs to hire more staff, provide more staff training and provide staff with a means to advance and earn promotions based upon performance. The funds to achieve these goals are all available from… Read more ?

Bruce, are you suggesting that it should take more than 106 employees for this department to achieve its mission?

Mark gave a presentation to HBAR a couple of years back in which he documented the number of applications fielded by the City and Henrico with precise numbers for both staff. The number of applications were almost equal. The amount of staff handling them were less than half for the City. I can’t speak for the number you provide. I know that the city has had gaps of one to two years without an electrical inspector and only 2 HVAC inspectors. The neglect is nearly criminal! The City has turned to third party inspections and is experimenting with third party… Read more ?

I think you need to look at what the City version of the Planning Department handles versus what the County versions handle. The City’s Planning Department handles building permits, which the County’s have a separate department for. If you combine employment numbers for all the equivalent departments, I believe the City is actually understaffed for the number and complexity of their building permits and other projects.

Completely disagree with this assessment – the planning department is already WAY too progressive and too supportive of blind growth over the needs of it’s citizens. My dealings with the zoning board have been extremely poor – they do not take into consideration homeowners’ desire to live in quiet, peaceful areas. They keep trying to change zoning near residential areas to make the city more chaotic, uncomfortably dense, noisy, and very unlivable. They’re going to force out lots of people of means to the counties, decimating the tax base. The planning department has NO DESIRE to respect what makes Richmond… Read more ?

What’s going on with the FOIA?

This seems like a sudden surprise, does anyone know more?

Yeah it is executive service at will department position so either he found a new job or we will hear about the latest City Hall scandal in a couple of weeks. Anyone know if Lenora is back at work. Lincoln can only generally “act” for 90 days and then he needs to be made interim CAO.

“It’s understandable that Olinger was originally hired as the City’s planning director in order to bring more density to the City of Richmond, especially along the Pulse corridor of Broad Street. But at this point, many Richmond citizens are questioning if he is the right person for the job.” https://www.oregonhill.net/2020/09/26/olingers-storefront-canard/

@Scott – It has been my experience (limited though it is) that up here in Church Hill, Mark Olinger has been an advocate for denser housing. The are lots (pun intended) of examples of infill where several houses are put on small lots.