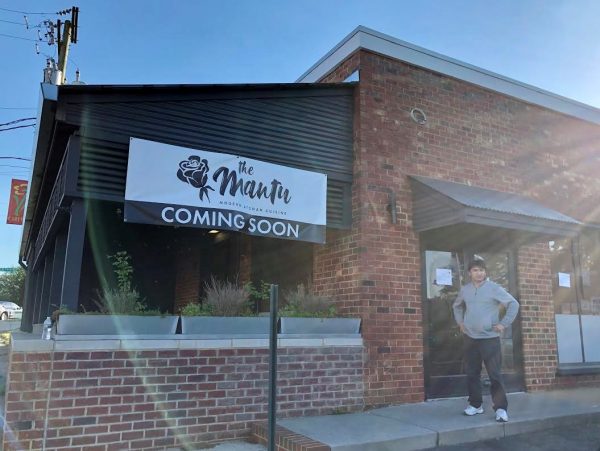 The Mantu is set to open in a couple of weeks in the former Burger Bach location at 10 S. Thompson St. in Carytown. (Photos by J. Elias O’Neal)

Long a dream since he was a child in Afghanistan, Noori is opening his first restaurant — The Mantu — in the former Burger Bach space at 10 S. Thompson St. in Carytown.

Burger Bach vacated the space about a year ago to move into larger digs down the street at 3426 W. Cary St.

The 1,700-square-foot Mantu space, which anchors a nearly 6,000-square-foot retail center, had been under lease since last August with Ellwood Thompson’s, the grocery store across the parking lot.

Mantu translates to “me and you” in Noori’s native Dari language and also is the name for traditional Afghan dumplings, which will be one of the featured items on the restaurant’s menu.

The Mantu is a 50-50 partnership with Shagufta Sajid, the owner of Noorani Kabab House, a Pakistani and Indian restaurant in Henrico County that’s been open for nine years. Noori worked for Sajid a couple of years ago before he began exploring ways to launch The Mantu.

“I knew he was talented and a hard worker,” Sajid said. “He’s more like a brother to me, and I wanted to be a part of his dream because he is very talented.”

They won’t disclose how much they are investing to start up The Mantu, which they plan to open in a couple of weeks, Sajid said. 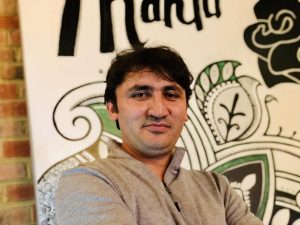 Hamid Noori is a co-owner of The Mantu with Shagufta Sajid.

Launching The Mantu has been a tireless effort for Noori, who arrived in Virginia about four years ago.

“It’s a testament to hard work, faith and believing in the good of people,” Noori said. “I never thought I would be here, in this country, doing something that I love … just surviving to get to this point was a struggle.”

Establishing The Mantu is the culmination of a journey fraught with tragic loss and defeat, survival, and triumphant new opportunities and beginnings.

Born and raised in Baghlan, Afghanistan, a province north of the capital, Kabul, Noori was the oldest of eight children. He recalls simpler times with his family, filled with good food, culture and adventure.

“We were always together,” said Noori, 34. “When people think of Afghanistan now, they think of the images that they see on television or read about online, but growing up there, it was a beautiful place. … I loved it; it was home.”

Then came the Taliban.

The terrorist group began fighting in 1989, hoping to take over the country. It battled civilians and military forces in the northern and western part of the country, including Noori’s province of Baghlan.

The Taliban eventually reached Kabul, forever changing the country’s landscape and the world’s perception of Afghanistan.

Thousands of people were killed and Afghanistan’s economy was wrecked, along with century-old monuments and museums.

But the biggest heartbreak young Noori would experience was the death of his father, uncle and cousins at the hands of the Taliban during an attack on their province. Their home was destroyed, his mother seriously injured.

“I was trying to process it all. We lost everything,” he said. “I was young and because my father was killed, I now had to provide for the family.”

Under the Taliban regime, women were not allowed to work, which forced 8-year-old Noori into the workforce.

Noori said he began collecting bones from gravesites in his province that later would be sold on the black market for as little as 50 cents each.

Noori admits it was a shameful task, but it also was a desperate attempt to provide for his family and to take care of his mother.

“You were just trying to survive at that time … everybody was,” Noori said with a quivering voice. “I wish I never had to be put in that situation. I wish I could take back what I did, but we needed the money, we needed to eat.”

He began working for a butcher; waking at 4 a.m. daily to slaughter cattle. He brought home unsold pieces of meat for his family. He also worked part-time at a grocery, which enabled him to give unsold toiletries to his family.

Noori said he began to fixate on food, recalling traditional Afghan meals with his family, who later lived just on bread and onions when he was 12.

“It was weird because there were days I would go hungry thinking about food,” Noori said. “I felt like that’s all I had was my family and my dreams.”

Noori worked several odd jobs, such as cleaning schools and at a fuel storage facility. His passion for food landed him a job that would change his life.

When Noori turned 20, the Hotel Intercontinental in Kabul hired him for his first kitchen job.

“That’s where it all began,” he said. “I learned how to cook and run a kitchen working there.”

Later, he became an executive chef at the five-star Kabul Serena.

Once the Taliban was ousted, rebuilding efforts ramped up in Afghanistan, and Noori met American military personnel who worked for the U.S. Agency for International Development. He took a second job in 2006 as the agency’s executive chef, where he prepared thousands of meals. In 2012, Tetra Tech – a California-based engineering and consultant firm – hired him to prepare meals for employees who were part of the Afghanistan Engineering Support Program.

But despite the U.S. occupancy of Kabul, the region remained highly dangerous and unstable.

Kabul Serena was attacked twice while Noori was there. In January 2008, six people, including his best friend, were killed. In 2014, an attack launched in the kitchen killed nine people.

Noori realized it was time to leave his beloved Afghanistan and forge a new life for himself and his family in the U.S.

With the help of a few American troops affiliated with the USAID, Noori and his family applied for a special immigrant visa in 2013; he was awarded entry into the country by 2015. He settled his mother and his brother’s family in Turkey.

Noori arrived in the U.S. via Newport News in June 2015, where he began working at Saffron Mediterranean Cuisine. After six months there, the Noorani Kabab House in Henrico hired him, and he worked there until about mid-2017.

“I could cook Pakistani and Indian food with no problem,” Noori said. “But I wasn’t cooking what I wanted. I just needed some time to focus on what I wanted to do.”

He took a three-month sabbatical working at the Vitamin Shoppe, allowing him time to map out his future.

With help from the Richmond office of the International Rescue Committee, an organization that assists immigrants and refugees with health, employment and other services once they enter the U.S., Noori landed a job at Ellwood Thompson’s in Carytown.

Instead of busting suds, he began preparing food for the salad bar on day one and soon was promoted to preparing meats. Noori also began working weekends as a chef for the Underground Kitchen, a local restaurant group run by Michael Sparks that’s known nationally for its exclusive pop-up dinners.

Noori finally was building a culinary career in America, something he never thought would have been imaginable four years earlier.

Then he was approached by Ellwood Thompson’s owner Rick Hood about achieving his ultimate dream: restaurant ownership.

He knew just who to turn to: Sajid, his former boss and friend at Noorani Kabab.

The pair signed a five-year lease with Hood for the former Burger Bach location in February. They are working with Sparks to design and build out the space.

The Mantu will offer a variety of mostly Afghan and Pakistani dishes, such as its beef mantu, which is a dumpling made with a housemade pastry shell stuffed with ground beef cooked with ginger, garlic paste, cilantro, turmeric and coriander.

“It’s a bit of a long process to make,” Noori said. “But the end result is a tasty dish that I think people will like, and brings something different to the area.”

Other menu items include chicken koobideh, which is skewered, cooked in tandoor clay, and served with red and white chutneys.

The restaurant also will include a full-service bar, including its Fire Water drink, made with jalapeno-infused vodka produced by Richmond-based Cirrus Vodka and olive juice that’s shaken and served with spiced rum.

The owners will hire about 10 people to staff The Mantu, which Sajid said will be open only for dinner, from 5 to 10 p.m. Tuesday through Friday; and from 5 to 11 p.m. Saturday and Sunday. It will be closed Mondays.

Parwaitz Mahmmadi is completing much of the woodwork. Artist Haley Ellis completed the main painting in the dining room.

Once The Mantu is operational, Noori said they would work with Ellwood Thompson’s to serve some of its food at the latter’s lunch buffet.

Meanwhile, Noori continues to develop The Mantu’s menu and generates revenue – and startup capital for The Mantu — while working as a Lyft and Uber driver.

“I’m still the provider for my family,” Noori said. “I take care of my family here and my family in Turkey. I want to bring them to America because I don’t want them to have to worry anymore. … I want them to be free.”

Sitting back in the low lighting, surrounded by boxes of silverware and covered tables, Noori looked around The Mantu. He contemplated the hard work that lies ahead, but also loved knowing that dreams do come true.

“It’s a miracle,” Noori said. “I never question God, but I often wonder how he allowed me to get to this point in my life. I’m truly thankful and blessed beyond measure to be here and to finally be doing what I truly love to do.”

what a great story! and its opening in my neighborhood too, so I’ll be trying it out. I wish them the best of luck and success.

Best of luck to Hamid! My family will be sure to come out and support you on this journey.

Good luck to you!

I can’t wait. But I hope they add lunch service soon. I’m not sure why they wouldn’t.